After cloning the repository and proceeding to the distrib folder, we find a binary alongside a C++ source file, which contents are: 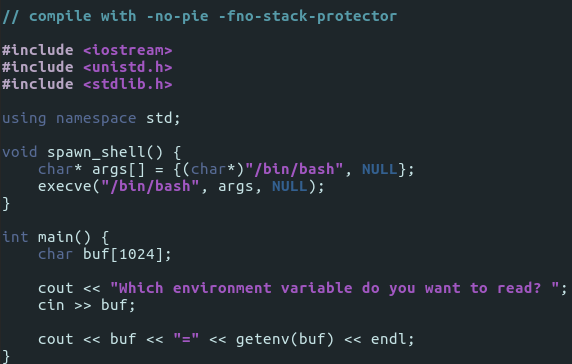 Example usage of given binary:

As we have an access to the source code we can spot some facts:

Another hint is the title – “1996 – It’s 1996 all over again!” – in 1996 Aleph One wrote an article for Phrack, called “Smashing The Stack For Fun and Profit” which introduced masses to the stack buffer overflow attack.

Notice: Trying to compile it on your own with included Makefile may result in a binary still blocking stack overflows – happened in my case, since my system by default passed stack-protecting flags. Try to hack shipped binary to save your time.

For introduction to stack overflow attack I delegate you to the article I mentioned above – it’s linked in the resources section.
What we’ll need to perform it:

First one can be retrieved by running our binary in gdb:

Let’s write a script that prints 1024 characters and pipe its output to the 1996 binary:

It worked, but still not caused segmentation fault or illegal instruction.
Gradually adding more bytes (more A’s) would reveal, that the offset is 1048 bytes:

We open the binary via gdb and disassemble main function:

We set a breakpoint at 0x0000000000400954, since after this instruction the stack will be cleared out (watch LiveOverflow’s videos linked in the resources to know how to identify that):

Run the program, type whatever on input so program would stop at our breakpoint.
Then examine registers EBP and ESP:

But, as the EBP points at the beginning of a 8 byte address, after which is the return address we want to overwrite, we need to add 8 bytes to our value, so it becomes 1048.

As we now know both offset and spawn_shell address we can feed it to 1996 binary with python:

We wrote spawn_shell address in reversed notation since gdb printed address in big endian notation, not little endian which is used by x86 processor.
Shell has been successfully spawned. We can print the flag:

Calculating stack size was a good exercise for knowing how calling a function works in assembly, that return address and stack frame address are put on the stack and popped in the end, and how to examine those in gdb. All needed resources are linked below.

As I said, 0xffffdaa0 is the address, where stack frame address lies.
Let’s break where we breakpointed before, and print surroundings of this address: